After a little over three weeks of riding my new bike, I feel like I have 15 pages of notes about how different my daily life on this bike is.  I'm not cruel enough to spring all those jumbled, hasty thoughts on any poor reader who happens across this blog, so I'll do my best to give just a few impressions in this post.  The three areas that I think about most are the ride quality, the bike's ability to handle large loads of cargo gracefully, and the fun of riding a bike with a kid up front and one behind.

This bicycle rides beautifully, even with wiggly children and very large loads of books or groceries.  It is absolutely a pleasure to ride, with or without significant cargo. 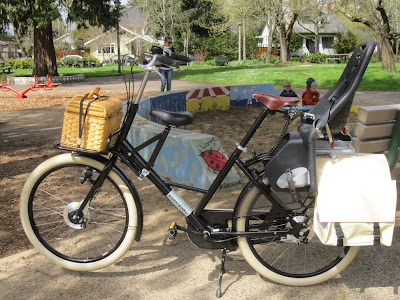 On the first full day in which I rode the Fr8, the kids and  I compiled the largest grocery list in recent memory.  (Two gallons of milk!  Ten pounds of flour!  A case of canned tomatoes!  You get the idea.)  I filled both panniers, put a large bag on the front rack, and then strapped another large bag on top of the rear rack (via a bungee on the metal tubing on the lower rear portion of Little's Yepp Maxi seat).  I knew that the bike was designed to carry lots of heavy cargo, but as I wheeled an overflowing shopping cart back to my bike, I feared that I had perhaps bitten off more than I could chew.  Should I have waited for a time when my children were not on the bike to test out a large and unwieldy grocery load?

While we were certainly not speeding through town, our return trip was relaxed and pleasant.  (I did pass a couple of people on the bike path, which was uniquely thrilling.)  The Fr8 just glided along the streets, rolling carelessly over potholes and up gentle hills.  Where I would have felt it necessary to focus on balancing my previous bicycle carefully under such a load (in particular when coming to a stop while climbing a slight hill), the Fr8 seemed resolute that it would remain upright and steady without much assistance from me.  Where I might have felt that I was having an argument with gravity on my previous bike with a big load, on the Fr8 the ride felt shockingly simple.

I am a very heavy library user, which is one reason that I felt I needed a proper cargo bike instead of a lighter transport bike outfitted with child seats.  Since the Fr8 arrived, I have made four library trips to pick up large loads of books (50 or more).   When carrying a significant amount of books on our previous family bike, I usually noticed the frame flex slightly beneath me, and felt compelled to focus a little more on balancing the bike.  It was challenging to carry lots of books home from the library when the road conditions were less than ideal, so I often rescheduled a library trip if there were heavy rains.  On one of my recent library trips with the Fr8, we encountered rain and hail (!) as we hauled our books (and of course, my two children) home.  It handled like a dream.  I used lower gears, and we pedaled along a bit more slowly, but in terms of balance, handling, and exertion, it was impossible to tell that I was carrying significant cargo.  Workcycles' website describes this bike as capable of carrying 500 lbs., and I'm curious to take a ride soon with it loaded to maximum capacity.  So far, though, it is quite easy and straightforward to ride with heavy cargo.

This bike also rides beautifully when I'm carrying nothing more than a wallet and keys.  I've ridden it several times without my sons, and each time, the bike glided along, smooth as butter, with little effort on my part.  Bumps in the road have a delightfully springy effect on the ride: the sprung saddle and wide tires cushion me from the rough pavement.  Paul Adkins described it as something like riding a La-Z-Boy down the road.

Loading and removing cargo is straightforward and convenient on the Fr8. 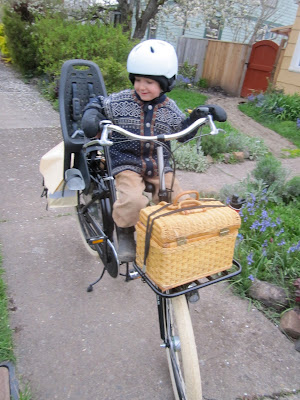 While I did have double-legged kickstand on our previous family bike, it was certainly not stable enough to handle children or cargo without at least some assistance in balancing the load on my part.  I feel like this new bike does all the balancing work for me.  I load Little in the rear seat, Big climbs on (typically he does this independently, unless the frame is wet), and then I load cargo into the panniers or onto the racks.  Simple.  I stand next to the bike if the children are on it, but I don't really need to steady it in any way.

This may not sound very important to you unless you have had some experience managing a tippy bike, squirming children, and cargo all at once.  Before the Fr8 arrived, I would occasionally have to stop loading groceries into my bike in order to help a tired toddler remember to stay close, or to help the kids work out a solution to a conflict.  With the Fr8, I have the option of loading my children onto the bike first, and then getting the rest of my cargo onto the bike without worrying about supervising mobile children.  Cargo-intensive errands are easier now, not only because the cargo is so well-balanced on the bike, but because helping my children stay safe and happy is sometimes easier with them loaded onto the bike first.  This has made a tremendous improvement in our errand-running experiences. 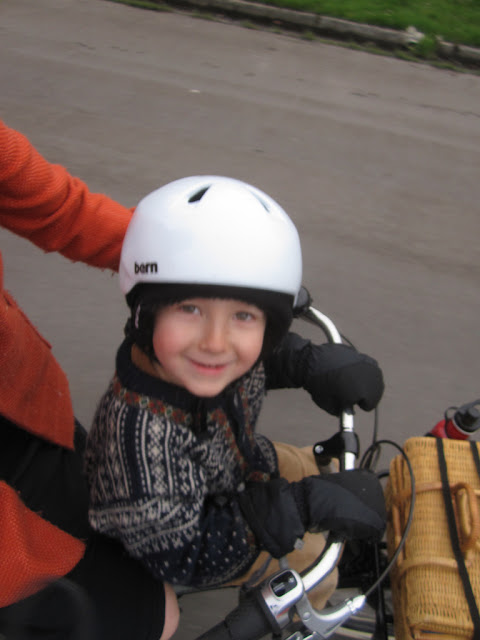 This bicycle is loads of fun to ride, especially with children!

Big likes sitting up front, dinging the bell, and viewing the streets, creeks, and paths.  There's this hard to define "Wheee" factor when you are sitting with a child between your arms.  It's fun for Big, of course, but also for me.  Somehow, with the front child on a saddle (as opposed to our previous set-up, where Little was belted into the Bobike Mini), there's this little bit of extra child movement and wiggle that adds to the feeling of bike joy.  I don't know how else to describe it.  It's not something that affects balance or handling at all.  Perhaps it reminds me of doubling up with a friend on my bike as a kid?  Anyhow, if you have the opportunity to ride with a child in a front saddle (I've heard that Brompton also makes one), I recommend you try it.  (Kidical Mass Eugene attendees: this is an open invitation to take my bike for a spin around the park!)

Our closeness on the Fr8 also improves communication, which most folks agree makes riding bikes with kids more fun.  When Big was behind us, via the Follow Me tandem coupler, it was sometimes difficult for me to hear him, especially because I have a slight hearing impairment.  Not a problem anymore!  The boys love talking to each other on the bike, swapping jokes, asking each other silly questions, or planning our afternoons.  I'm happy about this most of the time.  Until I have to help them change the subject.  (Yes, those were my children comparing each other to various parts of a chicken's anatomy on the bike path last week.)

And of course, it's fun to ride a bike that you feel is beautiful.  I bought this Fr8 because I wanted a family bike that could handle up to three kids and lots of cargo, but with a smaller footprint than a longtail bike or bakfiets.  I love this bike because it functions just as I need it to (and in fact, better than I ever expected it might).  It doesn't hurt, though, that this thoughtfully designed bicycle is also, to my eye, an elegant one.
Posted by Emily at Tuesday, May 03, 2011

If you're new to Mamafiets, you may want to read these posts, my favorites:
My Bike-Car Interfaith Marriage
Corners of My City
Napping on a Bobike Mini
On Sick Days and Neighborliness
Thanks for visiting!

Emily
Eugene, Oregon, United States
In the summer of 2010 our family got rid of one of our two cars. My husband Austin drives or carpools to his job as a carpenter, and I ride bikes, walk, or take public transit with my two kids, Big (age 5) and Little (age 3). This is the story of how much we love these fun, simple, and practical ways of getting around! Read more about us in our family profile.